Species are becoming extinct at an alarming rate. Endangered species such as the tiger, snow leopard, panda and Saimaa ringed seal are under serious threat. The only way to save these unique animals is to protect them. Otherwise, they will exist only in children’s bedtime stories.

Our everyday actions threaten nature, animals and plants more than ever before. We often think that endangered animals live in the Amazon rainforest or the African savannah. However, in Finnish forests and lakes there are hundreds of species that have only a few or at the most dozens of habitats. Experts have categorised these animals, plants and fungi as endangered because they are in danger of disappearing. The freshwater pearl mussel (Margaritifera margaritifera) is a large mollusc species that lives on the bottom of pristine flowing waters. It originally lived in large areas in the northern hemisphere, but the mussel is now rapidly declining in Finland as well as globally. Luckily, it was protected in Finland in 1955. 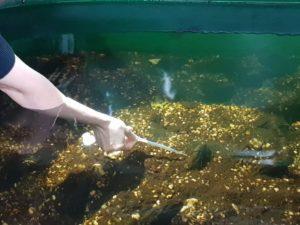 The fate of many freshwater pearl mussel populations was almost sealed because of pearl fishing. Like the name suggests, a small share of the mussels grow a pearl that develops around a grain of sand over decades. The prices of the most valuable pearls are equal to that of jewels, but most often the pearls are valueless because of their poor quality. According to current estimates, one in a thousand mussels may include a pearl. And yet, despite the recovery in the mussel population from pearl fishing, changes in the living environment have been fateful for them. The damming and clearing of rivers and the siltation of river bottoms as a result of draining swamps and forests has resulted in hard times for salmon species, which are also important for the mussel. In many rivers, populations have not seen new individuals in many decades. Even though mussels may live as long as 200 years, such a population will disappear sooner or later.

“In the past, there were hundreds of rivers with viable mussels; nowadays there are only a few. Proper reproduction takes place in, at the most, only five rivers,” says Professor Jouni Taskinen  from the University of Jyväskylä. At the Konnevesi Research Station, he leads a project for rehabilitating freshwater pearl mussels, aiming to save them from extinction in Mustionjoki, Ähtävänjoki, Karvianjoki and Isojoki.

Spa conditions to save mussels

However, the story of freshwater pearl mussels is not over yet.  In October 2016, a rather depressing group of the last individuals of their species was brought from Ähtävänjoki and Mustionjoki to the Konnevesi Research Station of the University of Jyväskylä. The mussels were old and skinny and in bad shape. The last signs of reproduction in their home river was from ten years ago. Now it can be seen that a two-year rehabilitation holiday in the tanks of the research station has been successful.

“The mussels are now in much better condition. In this autumn we found the mussels’ first glochidia larvae in the tanks, first in the individuals collected from Isojoki, then within only a few days in the mussels from Ähtävänjoki and Mustionjoki,” says Research Assistant Hanna Suonia from the University of Jyväskylä.

After two years of research and experiments, it has been possible to get freshwater pearl mussels to spawn in the tanks of the Konnevesi Research Station. The individuals of the mussel populations had already lost their ability to reproduce in nature but it has been possible to rehabilitate them so that their ability to produce larvae has recovered.

“The larvae live in the gills of trouts, enjoy water that is rich in oxygen and grow into small mussels. After ten months they detach from the fish and move to grow in the bottom sediment”, Taskinen says.

Captive breeding and transplantation are probably the only way to save many of the freshwater pearl mussels from extinction. However, the work does not end there that the mussels produce larvae that can grow to small mussels. The offspring must be cultivated for two to three years before they are big enough to live in the muddy conditions of the bottoms of today’s rivers. In addition, the success of transplanted offspring in nature must be ensured by establishing and maintaining suitable gravel patches or quality habitats in the upper reaches of rivers.

“The results also present new opportunities for the protection of the freshwater pearl mussel. We can still try to save populations already considered lost with the help of tank rehabilitation. This applies especially to the mussel populations of southern Finland, which are on the brink of extinction,” says Taskinen.

The ability to get even mussel populations categorised as dying-off to reproduce is one more reason to improve the living conditions of our rivers for mussels and salmon.

Anthony White is a British artist who studied architecture and fine art in England. He now lives and works in France.

He works in 2D, 3D, performance and sculpture. He is also a poet and has worked extensively in film, television and theatre in England, France and America.

He has lived and worked in France since 1991 where he has worked as a scenographer for theatre and museums.

He has work in collections in America, Europe, China and Mexico.

He has been a guest at artistic symposiums and cultural exchanges in Poland, Austria, Italy, France, Finland, Brazil, China, Assam and Mexico. He has curated exhibitions and organised cultural events and festivals.

Katja Juhola is a Finnish curator, visual artist and the founder and creator of the International Socially Engaged Art Symposium (ISEAS). Currently Juhola is a doctoral candidate at the University of Lapland in the faculty of art.

Juhola has been active in the field of art for over 20 years. She has held over a hundred exhibitions both abroad and in Finland. She has completed over ten major social arts projects in Finland and five abroad. She has been the chairman of the Raseborg Photograph Center in 2014-2017 and has curated several exhibitions. This symposium is the fourth international art symposium  organized by Juhola.

In her art, Juhola has moved on to activist activity. She sees through her own actions the possibilities to influence reality. Instead of art objects, it is important for her to process. Her basic aspirations are the principles of equality and ecological lifestyle. Juhola believes in the ability of art to make social change. Touch by art is no longer just touching the art object, but for its part is building it and thus producing something new in which the structures of hegemony can be destabilized.

Katja Juhola has participated in several international symposia and has found intense collaboration between different artists of different cultures to be proud of her own work and understanding. Juhola feels particularly important for artists’ interaction and discussions to create the critical and productive dimension of art. To make the discussions fertile, she invited mentor TT, Docent of Cultural Studies (Aalto University), Mari Krappala.

Juhola examines social art symposium as an activist art. Art is a result of discussions that create the agonistic public space defined by Mouffe, where people’s disparate opinions can face without the need for a complete, broad and shared consensus. Juhola explicitly sees the symposium as an act of personal activism, whose significance is reflected in the freedom of art in the framing of insitutions.

Jouni Taskinen is a Finnish researcher at the University of Jyväskylä.